Every episode you watch, you feel rather conflicted between what you want the outcome to be.

In some ways, you’re hoping that the myth is plausible and in another way you just want to see it completely busted.

Well, today I’d like to run the role of Adam and Jamie and try to bust a 100 year old trading myth called…

Let’s start with what it is and why people believe it to be true.

The September Effect in a nutshell

The month of September is globally and historically known as the worst performing month for stocks. As it might have some form of imperceptible effect on other stock exchanges like the Dow and S&P, I don’t believe this myth should be taken wholeheartedly on EVERY stock exchange.

Before we try to bust the ‘September Effect’ on the JSE, let’s look into the reasoning WHY it is taken to heart…

Anxious about the 3rd quarter

During September both investors and institutions begin to feel anxious about the third-quarter earnings and so theysell their positions in September in order to make a number of adjustments and rebalancing of their portfolios for year end.

Tax to be paid

Next, people look to sell their positions before the fourth quarter so they can harvest the potential tax losses as well as the mutual-fund tax loss selling.

Investors will then avoid buying into stocks during the month of September.

Month after the holidays

August is well known as the month to go on holiday for Investors, as most school holidays take place then.

Then September comes and suddenly there’s a complete cool off period.

Summer is over, tans are fading, people are returning from their vacations, and there is a complete mental let down knowing they’re heading right back into the land of the ‘rat race’.

This leads to investors locking in their gains and losses before the end of the year.

They do this in order to pay for their kids’ school and university fees, rent, properties and other financial duties.

With a large number of investors selling out of their positions, this would cause a drop in the share price which would result in a drop in stock returns for September.

It’s all in our minds…

As this is an age-old anomaly, investors believe that because the September Effect is coming up, they should start to sell their positions in the beginning of September.

This almost creates a self-fulfilling prophecy…

However, in reality this should not happen…

This means that with old adages, if investors learn about the seasonal patterns and the effects that take place during those times – then these anomalies should disappear all together where September will then see normal returns…

“After failing for several years to find a plausible explanation for why September is bad for stocks, I eventually gave up.”

The TRUTH lies in the charts 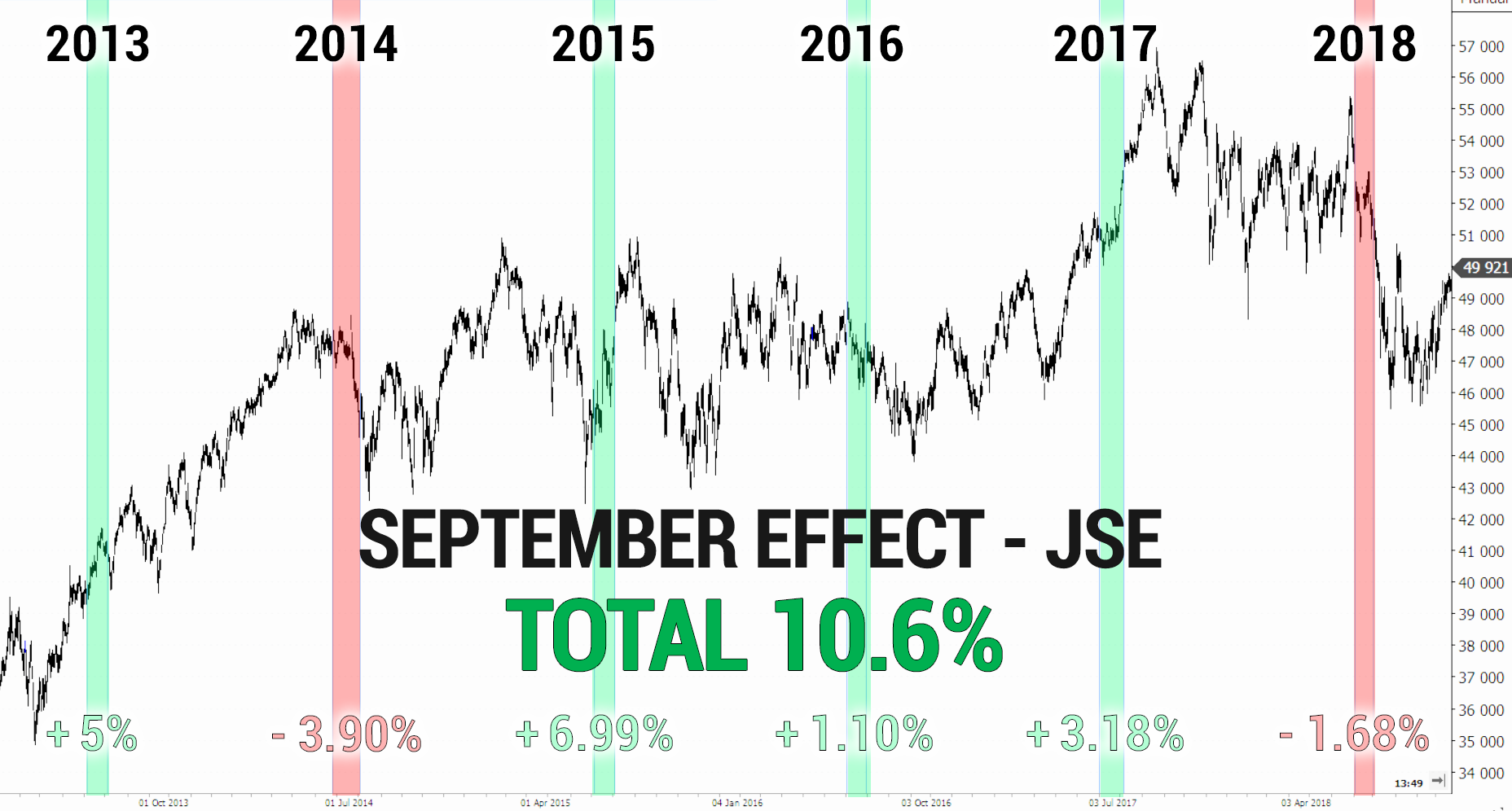 You’re looking at the daily chart of the JSE All Share Index over the last seven years.

It is clear that five out of those seven Septembers have shown positive returns and two have been negative including:

This totals up to a positive 10.60% return over the last seven years for the ALSI 40, if we sum up all the Septembers.

I can proudly announce that the ‘September Effect’ for the South African JSE All Share Top 40 Index is declared.

BEFORE YOU GO: What Trading myth would you like looked into?

You can email us at info@timonandmati.com or click here to let us know in our MATI Trader chat room.